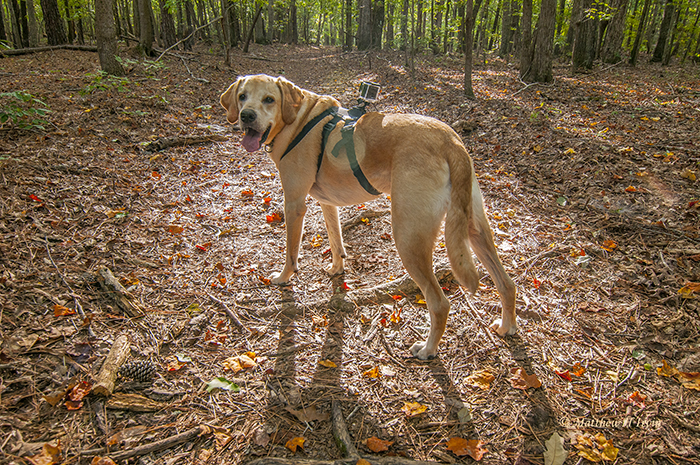 Woof, woof, well Matt has been slow to write a blog entry so I told him I would write one for him today. I’ll try to contain my excitement and keep my woofs and ruffs to a minimum. I have really enjoyed taking pictures with my human and jump for joy anytime he gets my harness and camera; I am always ready to go. I eagerly await the words, “ride”, “outside”, “play” and anything like that.

Where do I start? Well I usually tell Matt to start at the beginning so I should take my own advice. A long time ago I found myself back at that place called a shelter, where all the dogs and cats live, for a second time in my life. I was so confused, that day I was two-years-old I thought I was part of a pack, and I thought I was going on a fun ride with my human. Then they left me in that shelter again. I was shocked and hurt, she left me there! I knew something was wrong because I had been there before. After two days had passed I was trying to get someone’s attention to take me away from that awful place. One human came over and played a little with me and then called out “Hey Matt come over and see this dog!” When I saw this human named Matt, I knew this was my person. I had to find a way to go home with him so I ran over, jumped up on him, and in my excitement I accidently stuck my paw in his mouth! I knew I had better make things right after that mistake so I quickly ran over and got a ball to make him forget the paw. To my joy he threw it for me, I was so excited, and then he threw it again, and again. It must have worked because the next thing I knew is I was in a car with him leaving that dog and cat place once again. I sure hope I don’t ever go back.

My life since has been quite an adventure after I joined Matt’s pack. There were three of us, Maverick, my new human, and me. At first Maverick didn’t like me, but later we became great buddies. Earlier this year Maverick went to a place Matt called “The Rainbow Bridge” I don’t know what that means. I just know Matt was sad when he came home without Maverick one day and I was sad too.

When my human first got me we all went on hiking and camping trips and one backpacking trip. Then things changed for a while. He didn’t go out or play much and I was worried. He was not able to do what he wanted or what I wanted to do. I can always tell when something is wrong with him and I try to comfort him at those times. Sometimes he sleeps a lot, even more than I do, so I am right next to him guarding and watching. He always tries to look and act well in front of other humans, but I can tell when he really is not feeling well. Woof, but now he is more active! Oops there I go, I let a woof out!

After a while he did more and we went more places. He tells me the backpacking is something we won’t do any more, but we have plenty of camping and hiking to do, Woof! He did let me in on a secret, but don’t let him know I told you. He feels guilty about all the long trips he has taken and left me at doggie camp. Mind you I don’t mind visiting with my friends but I miss Matt when he is gone. Ruff, I got off track, the secret: he said if he can get the truck fixed up, we are going on a big adventure out west! I don’t know what west is, but a trip sounds great! I hope he can get the truck ready!

Well thanks for taking time to read my story and I hope you found it interesting. Now I think it is time to curl up next to the fireplace and take a nap, it is cold this morning. 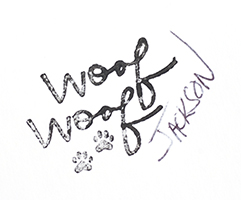